Skip to content
In-depth interview with Josh Smith at his studio in snowy rural Pennsylvania. 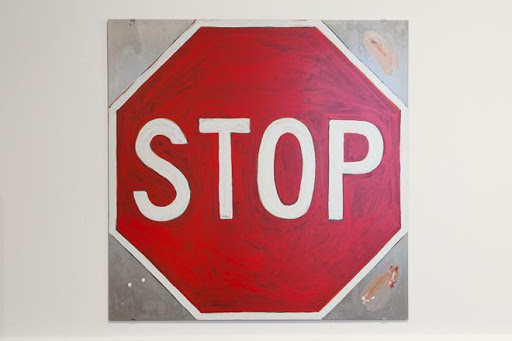 EMDW: There is a lightness and humour in some of your work, an imagination and playfulness. But it also feels quite wise to me. Take the stop sign paintings: putting a stop sign in a gallery is telling you to stop and look; it’s a picture; it’s a really good idea because people in galleries often don’t spend much time really looking. These works are playing with the viewer but for a very good reason. Do you think you approach your work with a humorous or light tone?
JS: Yeah, it’s like driving with one foot on the brake and one foot on the gas, which is not a very smart thing to do in real life, but you want something to accelerate away from someone and you want it to retard the way they do things too. I tried the stop signs on canvas and they function completely differently. The metal ones are reflective and shiny. Painting on the aluminium is awesome; everything sticks to it so well. I wanted to make a comment on that – how everyone was making shiny reflective things. The sign was a given. I knew it wouldn’t fail. Sign painting is a real thing and the stop sign is an international sign, which translates even though the word is in English. I don’t think it’s a greatidea. All my ideas, I think any artist could do them and it wouldn’t be a big problem. It’s just that I did them my way. I see tons of signs on the road I would like to copy, like the one-way signs. I just don’t want to lift up that metal again and work with the enamel. It was a moment and it happened right as I moved away from New York.
EMDW: Speaking of working on other supports and with other techniques, can you talk about how you bring other materials and techniques into works like the four-panelled Untitledcollage from 2009, or your exhibition announcement paintings or your encyclopaedias? 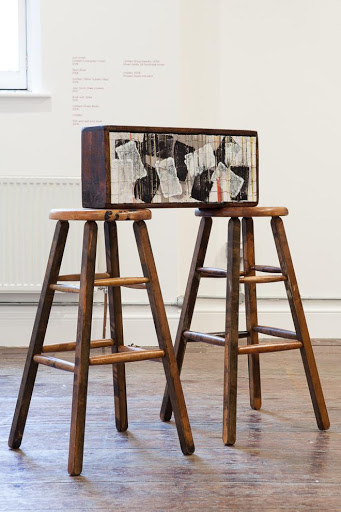 JS: I started making the collages in around 2004. In New York there’s tons of shit blowing around everywhere. I was living in Harlem and the Bronx and I would ride my bike around and there was all this stuff, so I started collaging on boards. You can keep adding boards, it’s like the pages of a book, and they don’t take up much space. I see these as assembled paintings. It’s also about trying to flatten tons of things onto a single pane. They usually start with a printed thing. I would take a picture, then resize it and print it out on many sheets of paper. I would cut the printer borders off the sheets, and then put them together. I saw it and loved it and it was a great thing with the paint on it. I could spill things on them and they would really change. I was probably influenced by Kurt Schwitters, and sometimes by Dieter Roth and by drawing a lot. They were also probably meant to counteract the abstract paintings.
With the announcement paintings, I was making my own posters and then I printed them onto canvases. Now, I’m trying to keep down the amount of canvases in my life and the amount of paper at any cost, because I can’t lift the paper any more and it just accumulates. I love the announcement paintings and I get asked to make them all the time, but I don’t personally want any more myself – and that’s pretty much when I will stop. Also, they are so recognisable, because I paint the silk screen itself rather than use it like Warhol did, photomechanically. I just take the blank screen and fill in all the parts. They actually have a thickness to them. The white just pours through the screen and there are no halftones.
The silk screen is an amazing tool in contemporary art, since the 1950s. You can use and abuse that stuff like madness. Pretty much anything you push through a screen works. But I don’t want to abuse it too much because I’m a printmaker. I’m not wasteful either and I can’t have those screens coming in and out of my studio.

The books were made to be like artistic business cards. You could just give one to someone, and people weren’t making a lot of books at the time when I started making them. There wasn’t this book craze then. Now books have become like what zines were. I dropped out of the books in the last few years because I want to wait for it to blow over. But when I made the encyclopaedia, I was making a lot of books. I was doing a show in Paris, and I don’t know why but I equated books and France, and the library was right by the gallery and I love the way the library looks by the river.
EMDW: Could you tell me about why and how you made the stage paintings? They have sculptural and performative qualities, but they are also quite dark because they look like coffins when they are folded down.
JS: You can show them folded down like that. They are on wheels because I made them alone and I had to move them alone. And they are about my height because I can’t make anything bigger than myself because I can’t lift it. I first made them in college and I remade them because I lost them all between things getting thrown out and a fire. I think when I first made them, when I was 19 or 20, they were made to mock performance, because a lot of people would come into a painting class and someone would throw a bucket of red paint on someone else. And everyone was in bands and that really bothered me. Why weren’t they in music school: don’t bring that into my painting class. I’m not the same type of mad as I was then, and attitudes change. I love the stage paintings and I wanted to show them because I wanted to show something about myself. They are a little scarier than a normal painting – each one is a sculpture and looks like it might fall over or fall apart. And with a lot of my work you can see clearly how it was made. There’s none of this seamless mystery, nothing is smoothed out, and the viewer can look at it and right away see exactly how it was made. So if they wanted to, theoretically, they could make it themselves. It’s immediately inspiring in that way: ‘Oh, here’s art I can make.’ 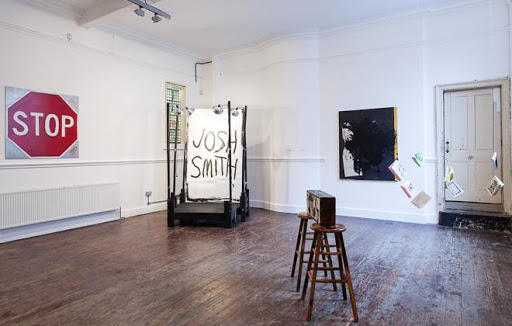 EMDW: Can you say a little about the Untitled black painting with the yellow band on the side from 2010?
JS: I started building up the surfaces of things with acrylic paint before I worked on them. In this case, the surface has a sheet of paper on it with which I had blotted another painting. I liked it enough and I kept it around waiting for someplace to put it. It was just about trying to make that thing into a painting. In 2010 I was really into the song Black and Yellow by Wiz Khalifa, and I remember I went through a little phase where I was making everything in black and yellow – though when I say a phase, it might have been half a day. And there’s another version of the song with bumblebees, and I can get really excited about something while it’s there in my head, and I just think that black and yellow look really good together. It’s an abstract painting – you stare at it and it stares back. And you don’t really have to get involved in a conversation with it, it just prints in your brain and you take it somewhere else. It might leave a bitter taste, but there’s nothing to it like that – all I can explain is why I gleefully made it. I can’t explain what it actually does. Looking at this work marks time for me.
Josh Smith interviewed by Ellen Mara De Wachter, 18 March 2013, East Stroudsburg, Pennsylvania